On the eve, quite literally, of the AMD Radeon 300 Series release, we are looking at the card it is going to replace. However, the internet is full of speculation that this re-branded GPU will not be a significant enough release to justify a new generation of cards we take a look at the R9 290X in the context of the new generation launch or whether with the pending price drops, the R9 290X is the card to get.

Sapphire describe this card as,

Based on the award-winning Graphics Core Next (GCN) architecture from AMD with 2816 Stream Processors, the SAPPHIRE R9 290X Vapor-X boasts 4GB of the latest GDDR5 memory running at 1325 MHz and high speed engine clocks of 1030MHz. Together these clocks deliver industry leading performance – but to achieve this performance with stability and reliability demands high quality components throughout the design (especially in the power control circuitry) together with a sophisticated cooling solution.

The Sapphire R9 290X Vapor-X Tri-X has a long list of features, check them out here, in the meantime, we picked a few interesting ones to highlight.

The card arrives in a very large box, and the card is extremely well protected from damage, which is good because the card is quite heavy and could be prone to the odd impact in transit. 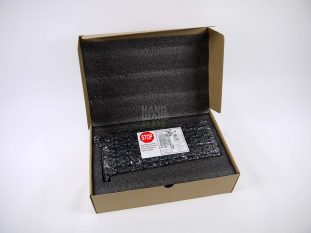 In the lower compartment, there are the usual accessories, though Sapphire have included an HDMI 1.4a cable, and what would appear to be the thinnest mouse surface in the world.

We don’t think it is usable, not really sure what to do with it, though we haven’t really tried. Next, the graphics card close up.