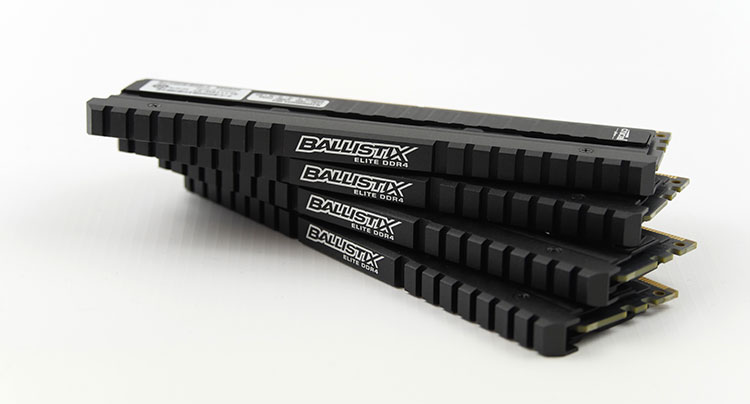 We wrote some time ago when we first started to test DDR4 memory that it wouldn’t be long before DDR4 memory speeds would have a 1:1 speed ratio with the CPU. Well, it didn’t take long at all and we have seen these speeds for the last 12 months at least. It may be a throwback to the days of the Front Side Bus (FSB), but it was always a goal to have 1:1 CPU/memory speeds, however unachievable.

It’s usually forgotten until a Memory Kit turns up for testing that’s high in MHz like the Ballistix Elite 16GB DDR4 3200Mhz Kit. So, it’s not going to really make a difference, other than the fact that the memory has a high clock speed, but at least it has a little more bragging right than your average RAM.

The Ballistix Elite range is a bit special, being Ballistix fastest DDR4 offering, it’s also equipped with a different set of two-piece heat spreaders. Ballistix Elite is also only 4Gb modules at the 3200Mhz speed, so today’s reviews is a 16Gb Kit in Quad Channel setup.

A typical Ballistix DDR4 set of specifications. The timings are slightly looser than slower memory and the volts are at 1.35v to power the modules along. Not unusual for a high-end memory product though,and still within normal DDR4 parameters.