We recently reviewed the Crucial Ballistix Sport DDR4 2400Mhz Memory and it scored an excellent 4.6 out of 5.0. DDR4 is still new and still exclusive to X99 Chip sets at the time of writing, so though it’s an excellent memory kit, big gains can be made when a technology is learning to walk through its initial phases of development.

We have been sent the LT version of this memory to review, and it’s part of an ever growing DDR4 market from Crucial and indeed from the mainstream manufacturers, who are boosting all their ranges in 2015. Crucial are a cornerstone of memory manufacturing, so we should expect solid performance and products, so let’s do some testing and see what the LT can do.

Crucial are also calling this memory “Performance memory for everyone” though it does look to be aimed at the gamer and performance enthusiast, mainstream users with the appropriate chipset will also enjoy the fun.

Launched in September 2012, DDR4 offers a higher module density over DDR3 and at a lower voltage. This means larger and cooler DIMMs giving the highest module size to date. DDR4 also promises higher speeds than ever before probably maxxing out in the 3500/4000Mhz plus area, almost a 1:1 relationship with the CPU.

Crucial describe this memory kit as;

Performance memory for everyone

Serious gamers are serious about our award-winning Ballistix and Ballistix Tracer products. At Crucial, we engineer these products to deliver the fastest, most reliable memory for gaming and performance enthusiasts.

But why should the most hardcore gamers have all of the fun?

If you‘re new to performance memory and like what Ballistix has to offer, the Crucial Ballistix Sport Series is a great place to start. This line was created for mainstream users and general enthusiasts. They feature heat spreaders for thermal performance — along with standard timings and voltages, making this reliable, quality module ideal for maximum stability and compatibility.

The Ballistix Sport LT kit is packaged in a clear plastic clam shell casing. Not the most inspiring design but it allows you to see what you are getting, which is a little more inspiring! 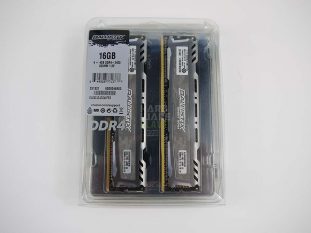 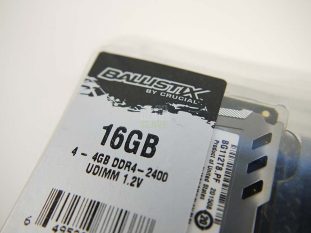 Crucial’s design for the  Ballistix Sport LT DDR4 modules is clean and modern looking. It won’t be hard to match with most colour schemes when building a rig, or adding to an existing build. The LT has pretty much the same specifications as the non LT model, but does feature what Crucial are calling Digital camo heat spreader which extends above the non LT kit by a couple of millimetres.

We will check the cooler clearance later using the Noctua NH-D15 CPU Cooler and the Asus Rampage V Extreme Motherboard if required.