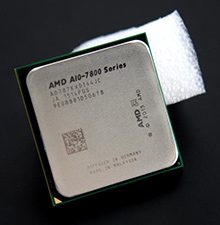 We’ll be testing the A10-7870K APU, a quad-core CPUs with eight activated Radeon cores totaling towards a nice 512 shader processors. The APU memory controller these days supports up to DDR3-2133 and 2400 MHz with selected memory MHz memory speeds. As a K-series processor it is unlocked as well so you may tweak a little […]

The new APU will replace the Godaveri platform which we were
introduced to with the Carrizo APU, with the Carizzo-based
notebooks arriving in the next couple of months, but m [...]

We review the AMD Athlon 5350 APU and AM1 Platform with
socket FS1b motherboards. This APU is based on
AMDreplace_num_entitys Kabini architecture bringing the [...]

AMD’s Kaveri APUs are dependent on system memory. The
easiest way to explain this dependency is by thinking of the
GPU on the Kaveri APU as a graphics card, but with [...]

AMDreplace_num_entitys release of the Kaveri-based
Accelerated Processing Units (APUs) has given motherboard
manufacturers license to promote a range of FM2+ boar [...]

There are few better feelings in technology than choosing
parts for a new PC build, purchasing them, and then laying
them down on the table ready for build ti [...]

Llano put K10 CPU cores and a Radeon HD 6000 series GPU on
the same die and introduced us to the FM1 socket. The Fusion
project was then reformed as the Heterogeneous Syst [...]

We review the all new AMD A8-7600 APU from AMD. This APU is
based on AMDreplace_num_entitys new Kaveri architecture
bringing the CPU and the GPU even closer together as the [...]