We haven’t said much about the choices around the RAID card and the drives but there wasn’t much to it. It was down to popularity, reviews, feedback and performance. The Highpoint 2720SGL is pretty much the best for the money, and not a lot of money at that. In the UK it’s around £120 at the time of writing which for the performance and price point, is rather good. The Western Digital 4TB Red Drives were just the same, though as stated we were a little more nervous about the early release failure rate, but it never it never really affected us.

Other bits and pieces include a couple of Molex to SATA adapters allowing a cleaner cable management behind the motherboard tray and HDD caddies. Talking of caddies, we also included a 2.5 inch to 5.25 inch adapter and moved the SSD’s to a spare optical bay in the front of the case. It does present a new cabling dilemma but it has resolved some issues at the back.

We have replaced the fans with two Fractal Design “Silent Series” 120mm fans and moved them to the front, cooling the six Western Digital 4TB Red Drives, only because we had them lying around. Moving the fans to the front was for two reasons, cooling the drives as stated and removing the negative air pressure from around the CPU cooler. This would have caused some starvation in flow and an increase in CPU and case heat.

Here are the Hard Drives front and back, cabling is so so, mostly due to the frequent rebuilds and should tidy up a little more once we are happy with the set up. 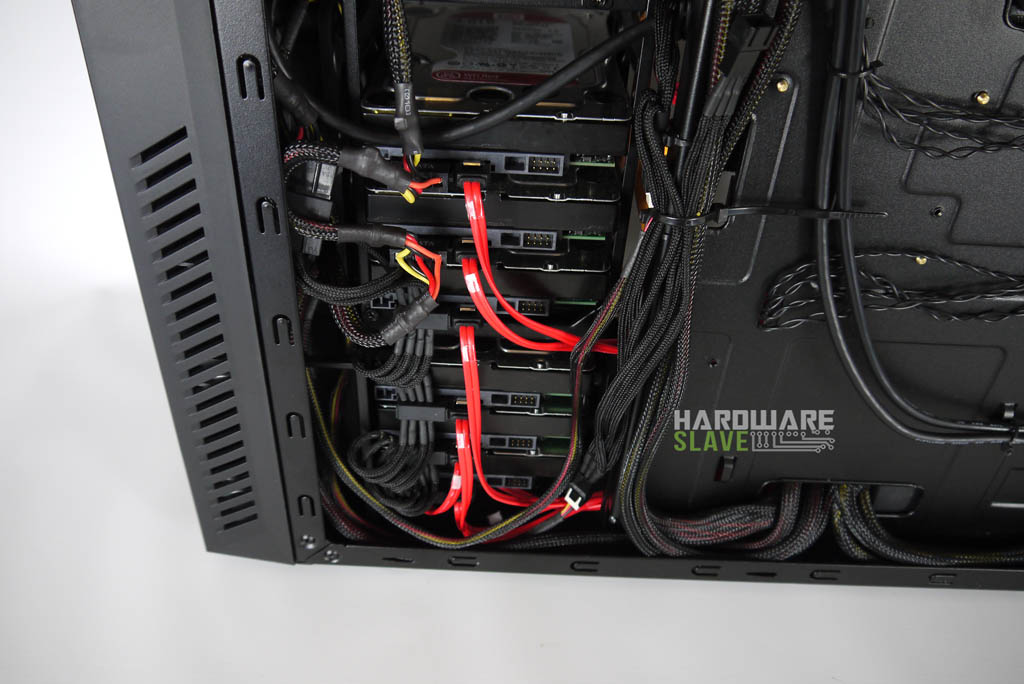 We do have a little spaghetti inside the chassis, a little tidy with some cable ties should resolve this quickly.