Nvidia skipped the 800 series title when releasing their latest generation of high end gaming graphics cards but that’s not the only surprise this release gives us. For many years now Nvidia graphics releases have been the source of much anticipation and controversy with most of us expecting to recapture the massive FPS boosts and feature rich graphics performance we see on occasion.

The environment for high powered and ‘glow in the dark’ heat properties of some releases are probably a thing of the past or at least most manufacturers are feeling the environmentally friendly elephant in the room.

It is always going to cast a gloomy outlook for PC components with graphics cards amongst the top targets for this witch hunt. There has been so much noise and some facts out there in the web that we really needed to wait until the launch and lifting of the NDA’s on the 19th September to really find out what’s in store.

As always, there is a lot going on in the tech world driving the requirements into the latest releases across the IT world and graphics are not excluded from this, for example DX12. Nvidia, just like AMD, need to ensure their releases are not just rehashes of older technology or full of pointless features no one truly uses. It can be a balancing act as the internet world is not a forgiving world, and will state their opinion without anything censoring it; the way it should be.

Today we are reviewing the GTX 970 GAMING Twin Frozr V from MSI and we are going to put it through some synthetic, real life and feature tests. We will pitch it up against the PNY XLR8 GeForce GTX 770 – Enthusiast Edition, which sports the GPU the GTX970 replaces.

MSI state they have spent 18 months working on the Twin Frozr V, listening and incorporating the request from fans and users alike. The latest version of the MSI Gaming App is expanded with MSI Scenamax technology amongst other things and a brand new fan design which has a few tricks up its sleeve not to mention they are 100mm in diameter.

The entry memory capacity is now 4 GB of GDDR5, giving gamers access to higher resolutions and a little more bragging rights. It also runs at an astonishing 7.0 Gbps across a 256bit bus. The 100mm fans are claiming a 5% reduction in noise over the previous generation of Twin Frozr when spinning, and a 10°C reduction in temperatures at maximum fan speed.

With HI-C CAP capacitors super ferrite chokes and Solid CAPs, the non-reference MSI GTX 970 GAMING Twin Frozr V is claiming efficiency, stability and a long and reliable life of over clocking. Before we begin we need to have a look at the technology and the basic GTX 970 specifications.

NVIDIA Maxwell – This is NVIDIA’s most advanced architecture ever, delivering incredible performance and unmatched power efficiency. Plus, it offers cutting-edge features like advanced sampling and Dynamic Super Resolution technology that delivers 4K-quality gaming—even on 1080p displays.

The MSI GeForce GTX 970 packing is the usual cardboard but with a twist. This stuff is thinner but tougher, it feels a little plastic coated as well, giving it a nice and strong feel. Inside we see a large black box with the MSI logo embossed and inside a few required items to get you going. 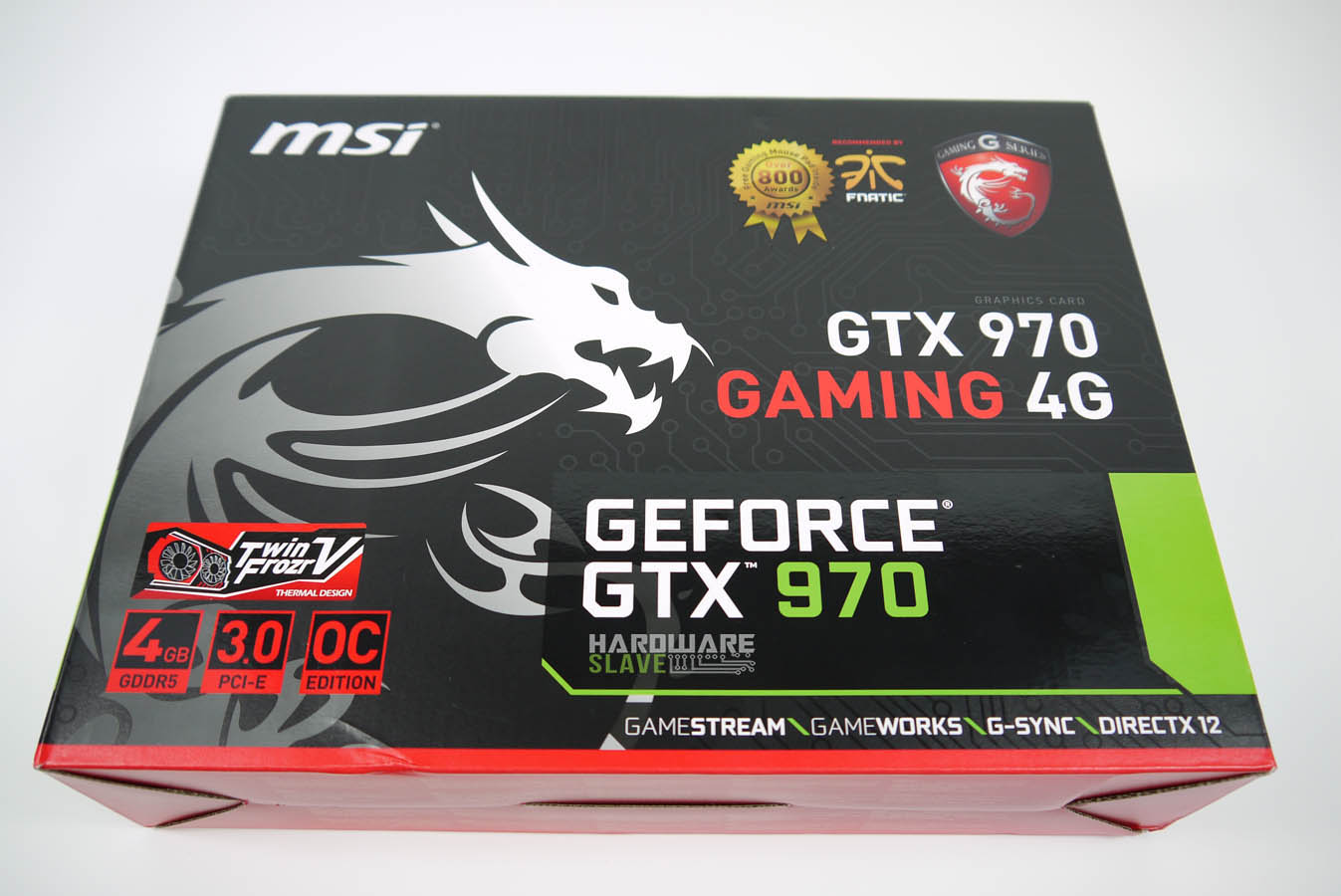 There isn’t a normally included “Do Not Disturb” door card that usually comes with the MSI Gaming products, though not too much of an issue. There is a nice PCIe power adapter, it is wrapped tightly and feels high quality enough to be used even in modded chassis.

A mouse mat or surface as they are now known is also included. It is not generic; instead it is styled towards the GeForce GTX 970 itself, with some of the cards details and a picture of it. It is a bit “fan boy” but it isn’t bad quality and will be of use to someone. It is a special edition feature so it may become a trophy or selling point for some in the future.