With all the fanfare around the AMD Radeon RX 480 release and the driver and power issues, we have put our review on the back burner in anticipation of the new drivers which resolve these issues. They have arrived so we’ll get that posted as soon as possible, but in the meantime we have something a little different, the Sapphire ITX Compact Radeon R9 380 graphics card. This still has a place in the new generation of RX cards due to its almost unique form factor, ITX. We used the card in our Lian Li PC-Q21 Mini Tower review and it was a superb fit, so we thought we’d put it through some tests and see how it performs. We didn’t want to attempt a 4K UHD test, it’s not really what this card and GPU is for, so instead we’ll focus on a typical 1080p set of tests.

So why is the ITX form factor important? In reality, it’s a bit of an untapped market. In the very near past, all owners of ITX form factor systems had to make do with very limited performance, graphically and for other components of their build. Not only that, small form factor graphics cards had very limited capabilities compared to their big brothers. There are still very few ITX capable cards with any sort of performance credentials, so any card in this sector is going to be welcome.

Added to the compromised world of ITX builds is the PSU, needing a special, and usually underpowered PSU to give life to your mini build. Sliding in at 225W claimed power consumption, the Sapphire ITX Radeon R9 380 is only going to require a 500W PSU, and that’s just about the limit of the SFX form factor PSUs and the newer SFX-L form factor.

We all see the numerous high end GPU reviews and builds, but how do the other half live, the ITX crowd? Either by choice or by necessity, they want something small and powerful, and Sapphire may have just helped those in need. 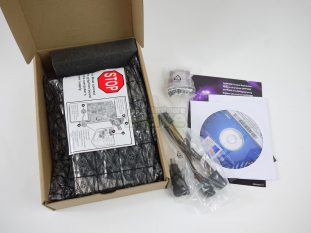 There’s not much to it, it’s a very small card, though around the size of the AMD Radeon R9 Nano and takes only an eight pin PSU connection. We’ve still got the protective film on the card, it’s not an unusual finish to the cooler cowling.