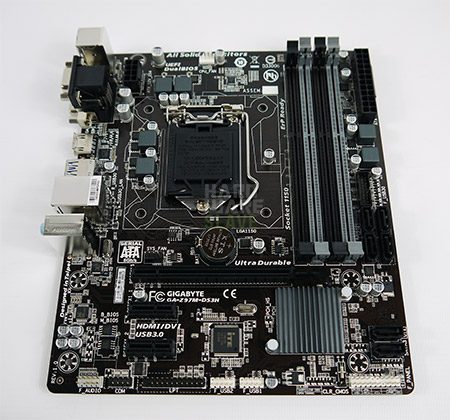 Another Z97 Chipset motherboard is on the bench, and it’s another Gigabyte. The Z97 Chipset by Intel is probably the mainstay of most mainstream, desktop and gamers on a wide ranging budget. It was more a case of evolution than revolution over the Z87, refinement over sweeping changes.

We do like the Intel Z97 Chipset in the Hardwareslave offices, we have servers, desktops and gaming PC’s powering our IT and tech fixes every day. We are not going to be down on AMD, we love them too, but mainly for their graphics these days.

Anyway, on with today’s review, the Gigabyte Z97M-DS3H Motherboard, and a Micro-ATX version of the Z97 Chipset. Not aimed at the gaming market the Z97M-DS3H looks to be a nicely featured standard motherboard.

Gigabyte describe this motherboard as,

The Z97 is well known, with chipset diagrams all over the web, we’ll skip that part and cut to Gigabyte’s offering.

It has all the standard features, though high end audio, gamer LAN or Wi-Fi and a fancy gamer’s heatsink and fan it doesn’t.

There are plenty of connectivity options with this mATX motherboard including on-board graphics, lots of USB and a decent amount of SATA connections.

There is not much in the box, and it’s a little unusually set out with the SATA cable presented on top. Instructions manual, CD, SATA cable and I/O Shield is all you get, other than the motherboard. We would normally expect to see a couple of back panel I/O brackets, maybe?