We had previously upgraded the CPU from a lowly four-core Intel Xeon E5-1620 v2 to the much more capable Intel Xeon E5-2667 v2. This doubled the core count and increased the L3 cache from 10Mb to a more useful 25Mb. 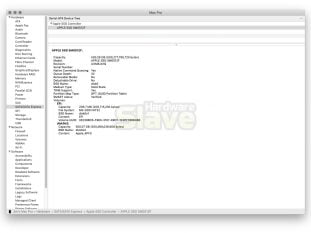 All synthetic tests are carried out three times with the best result taken. We used the various software’s test count settings, so, for example, CrystalMark we ran the test count at three, but repeated three times.

We use charts to describe the benchmark results. These use colours that can often be similar or even different shades of each colour. If this becomes hard to read, you can click on any of the review samples on the chart to remove it or add it back in. We have also included the images for references at certain points.

The Mac Pro (Late 2013) in our stock configuration has 32GB 1866MHz DDR3 ECC memory installed, along with Apple’s SM0512F 512GB AHCI proprietary storage which is made by Samsung, and all using the Apple APFS, which is Apple’s proprietary file system, creatively named “Apple File System”.

We also installed the JetDrive Toolbox software but only used this to review the default settings. Trim status was managed by the Operating System and System Optimisation was disabled for the review. This is the equivalent setup to the stock install.