There’s some headroom above the component area which Metallicgear uses for cable management. The CPU PSU cable has its own channel to house the extension cable used and some Velcro ties to keep it in place. You can use it for other cables too, but room is limited. 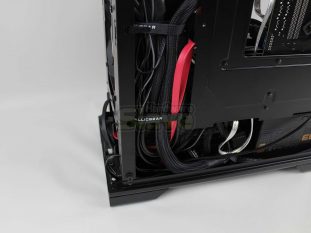 Metallicgear includes cable ties, but we try not to use the included ties where possible and just let the chassis design manage the cables. Metallicgear also includes some very handy velcro ties, which are used to keep the bulk of the chassis cabling in place. We also threaded the PSU motherboard power cable through here and it works very well. We also push a few other cables through here, including the PSU CPU power cable and routed it to the included extension.

With the SATA power and data cables installed for the two front HDD’s, things get tight, and you’ll need to have a think about this section. It’s possible to get everything installed, but we pre-installed the cables on the HDD’s and then threaded them in first. Motherboard SATA headers will have an influence here too, so research well and understand the best way to route your cables.

This chassis is a well thought out chassis, with built-in cable management, rather than it being an afterthought. With dual tempered glass doors, you can also get a lot of lighting out of it, and it has a good few options for airflow in the main section of the chassis, helping cool the motherboard, CPU and memory, graphics card and anything else you want to install.