We recently reviewed the Sapphire Radeon R9 290X Vapor-X Tri-X in preparation for the AMD Radeon R9 300 Series release and to be honest, we were a little underwhelmed by the card. Still a strong contender in the high end graphics market but in the shadow of the GTX970 from Nvidia, not to mention the GTX980 or GTX980 Ti. So a couple of days ago we tuned into the live broadcast and we got a sense of excitement from the event, it seems like AMD are really proud of the R9 300 Series release and the supporting product ranges they launched on that day.

Now we have a look at the high end R9 390X with a whopping 8Gb of 6Ghz graphics memory, and compare it to the card it just replaced, the Radeon R9 290X, worth the upgrade? Let’s find out with the XFX Radeon R9 390X 8GB DD Black Edition Graphics Card.

XFX describe this card as;

The XFX Radeon R9 390 Series graphics cards puts premium 4K gaming and Virtual Reality within reach. Experience smooth, true-to-life and stutter-free gameplay with ultra-high performance and resolution thanks the 8gb of onboard memory. A whole new dimension of gaming, for a whole new reality. Your days of gaming in mere HD are behind you. All the power you need for the most immersive 4K gaming experience and beyond, now and tomorrow.

You have probably seen in the press releases that this is not a new card, instead this is a bit of a re-brand, or a refinement as some may call it. The 8Gb of memory is more than welcome however.

Apart from the over-clock and the extra memory, XFX have thrown in some of their own features:

XFX developed the Ghost Thermal 3.0 Technology for the R300 series of AMD graphics cards, and with voltage control and extra VRM and memory cooling, this should be enough to tempt the armchair over-clocker and may even be an asset when water-cooling. 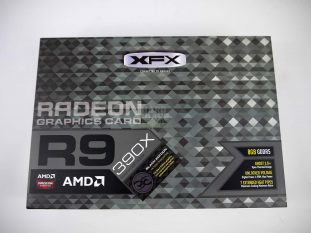 Nothing too special here, though it looks like “intelligent” packaging has been used. No games or download codes are included with the card, let’s hope that changes in the near future.